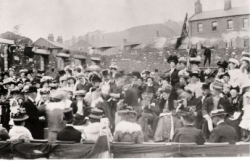 The origins of Marsden Conservative Club lie in the year of 1865 when a group of gentleman got together to plan for the General Election. They met in various public houses and each other's homes, until in 1908 they built and moved, into the existing building which was built and designed by local architect James Sheard Kirk.

The laying of the cornerstones of the new Marsden Conservative Club on 20th June 1908.

On being presented with the trowel and wallet, Miss Crowther offered them back to the club for safe keeping and display. 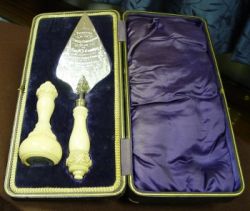 Trowel and wallet from the stone-laying ceremony

From 'The life and times of the Con, Marsden' by David E. Wilkins